For a searchable list of packages that can be installed with Cygwin, see https: You can employ heavy compiler and linker optimizations to your payload. Syscall Number and Parameters The next step is to figure out the syscall number of execve and the parameters this function requires.

Shellcode has no need for registered exception handling. So, in order to ensure that my shellcode hits its entry point with proper stack alignment on bit, I had to write a short assembly stub that guaranteed alignment. The result is that we only have one single null-byte that we need to get rid of.

Tears rolled down my face as I chewed on my tongue trying to trick my own brain. This tutorial is generally for people who want to learn the basics of ARM assembly.

Writing R documentation filesPrevious: This includes phones, routers, and not to forget the IoT devices that seem to explode in sales these days.

And we will even have to pass two null pointers among the arguments to execve 2. This part is admittedly a pain in the ass.

Making the code do something interesting Ok, now that we have some code building and running, lets make it do something. Tells the compiler to favor small code over fast code — an ideal attribute of shellcode. You sat up all night and obsessed in the spiral of crime and only focused on it.

Delete the Cygwin root folder and all subfolders. I forced myself up and looked around before setting my eyes on the phone on the counter. This is the preparation for the followup tutorial series on ARM exploit development. 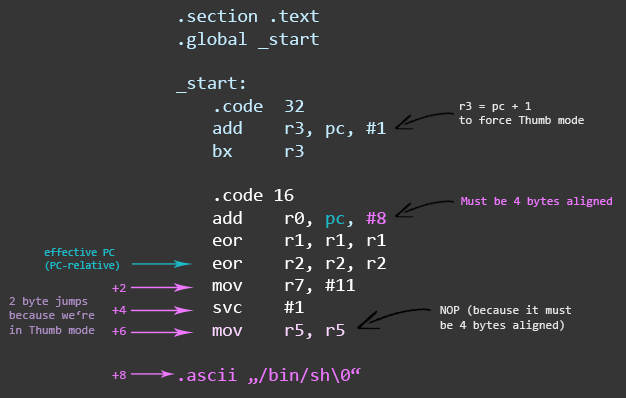 Before doing that, it is a good idea to check if the shellcode works as a standalone. Cygwin Setup can be used to install any packages that are on a Cygwin mirror, which usually includes one version previous to the current one.

Therefore, all branching instructions and instructions that dereference memory must be executed relative to the base address of where you were loaded.

Note the directory where you saved the snapshot tarball. Keep in mind that since we are now using Thumb mode 2 byte instructions and our code must be 4 byte aligned, we need to add a NOP at the end e.

Because we are generating shellcode, the order in which functions are linked is extremely important. Given the widespread usage of ARM based devices and the potential for misuse, attacks on these devices have become much more common.

Now let's see how to use this system call in assembler since there are only three arguments, we can use registers. How do I install snapshots. Stop the X11 server if it is running, and terminate any Cygwin programs that might be running in the background.

The recommended method to remove all of Cygwin is as follows: Try another mirror, or try again later. If they are not, unintuitive errors will occur when attempting to compile.

If setup has otherwise behaved strangely, check the files setup. 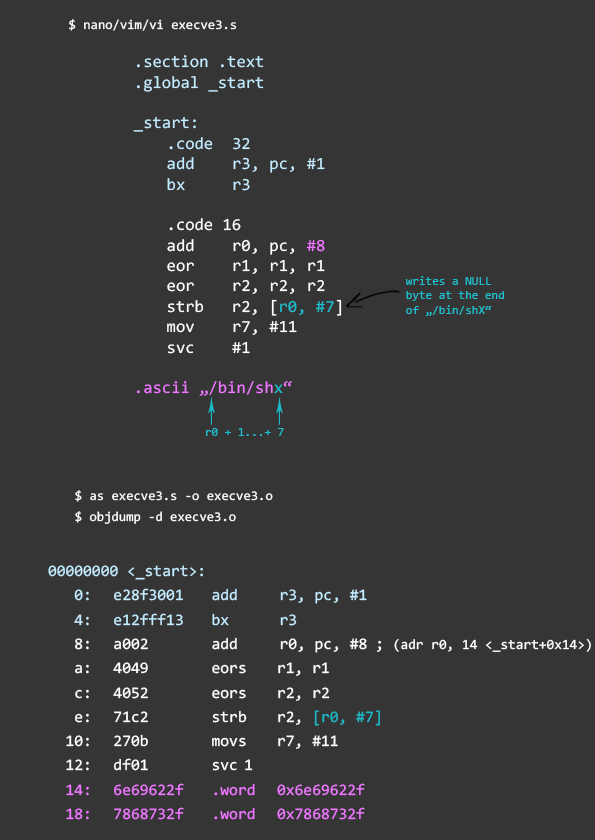 Fortunately, Get-PEHeader already does this. Be patient, there is some computing to do at this step. Here is the code that performs the alignment: Try another mirror, or try again tomorrow.

Why not install in C: For this reason it is common and recommended by most professionals that people new to programming start with python. Especially for those of you who are interested in exploit writing on the ARM platform. The quickest way to delete the entire tree if you run into this problem is to take ownership of all files and folders to your account.

It will only contain a single section. Notice that we also put an infinite loop at the end of the program, to keep it from going back to the QEMU loader. This bar-code number lets you verify that you're getting exactly the right version or edition of a book.

The digit and digit formats both work. Basically, what’s happening here is I am preserving the original stack value, and’ing RSP (the stack pointer) to achieve byte alignment, allocating homing space, and then calling the original entry point – ExecutePayload (i.e.

Today—February 27—is the anniversary of John Steinbeck’s birth in My favorite work by Steinbeck is East of Eden, which is in some respects more of a book of American philosophy than a novel.

There’s one passage in particular that stuck with me (and tends to stick with anyone who reads the book). Performance. One of the most important benefits of Visual Studio Code is its performance. The full version of Visual Studio is incredibly powerful, reliable, and extensible, but that often came with a huge performance hit.

Praise for Previous Editions of A Practical Guide to Linux® Commands, Editors, and Shell Programming “This book is a very useful tool for anyone who wants to ‘look under the hood’ so to speak, and really start putting the power of Linux to work.

Writing arm shell code
Rated 4/5 based on 49 review
michaelferrisjr.com: Put the fun back into computing. Use Linux, BSD.